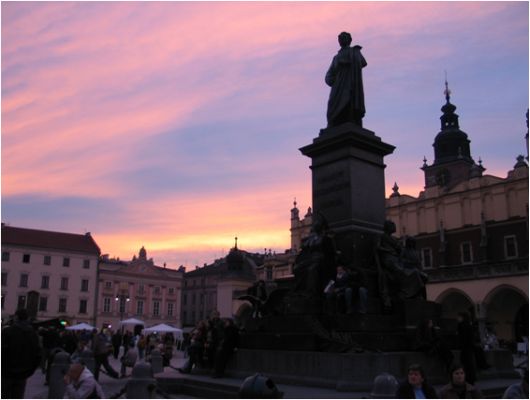 A walk through the historical city center of  Krakow is a journey through time. The impressive Wawel Hill, St Mary's Church, and Market Square with its Cloth Hall are unique: every spot fires your imagination and every stone breathes history. From its very beginnings until the seventeenth century, Krakow was the capital of Poland, and still remains an intellectual and cultural center. The city is the nation's most important heritage complex, with approximately 6000 historic buildings and about 3 million movable heritage artfacts gathered in the city's museums, churches and private collections. Krakow's heritage includes all epochs and styles. The most beautiful and precious among historic sites are the Royal Castle and Cathedral on Wawel Hill, the ‘heart' of Polish history and the most visited sites in the whole country. The city has preserved its mediaeval layout, with a centrally-located and spacious Main Market Square, an ordered grid of streets, important municipal buildings, a university complex, churches and houses. The historic center of Krakow was included on the UNESCO World Heritage List in 1978.

During your visit do not forget to admire the artwork of Leonardo da Vinci (‘Lady with an Ermine'), Rembrandt, Rubens and other masters.

The meeting will take place in Faculty of Chemistry JU in Krakow, at the Campus of Jagiellonian University Revival, close to the National Centre for Synchrotron Radiation SOLARIS. The venue is easily accessible by public transport from the city center and the main building of National Museum in Krakow which houses one of the largest galleries of painting and sculpture from the late 19th century on in Poland, with the artworks by Wyspiański, Malczewski, Wyczółkowski and others, a vast display of militaria ranging from 12th to 20th century, and decorative arts and crafts gallery with gold, silver and precious stone artifacts ranging from twelfth to eighteenth century.

By air: The international airport Krakow-Balice is the second largest airport in the country. It serves domestic flights to Warsaw and direct continental connections with many cities in the world. The city center is easily accessible from the airport either by taxi or public transport.

By rail: there are many international connections to all the major towns in the neighboring countries. Warsaw, the capital of Poland, can be reached in about 3 hours by InterCity trains. The main Railway Station (Kraków Główny) is situated in the very center of the city.